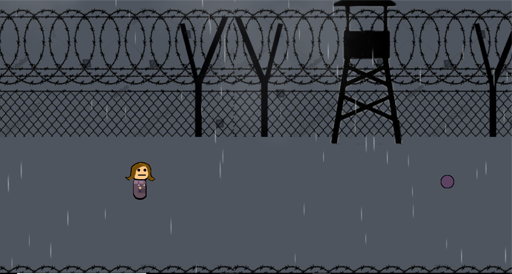 The next screen will show two guard towers, with moving beams of light. The player should look at the guard towers first, as the beams will draw the eye because they are moving. The immediate visual association of the search light and the tower should indicate to players that they should avoid these beams. The pile of dead characters are similar to the player, to promote similarity, but they are also greyed out with X’s for eyes to indicate they are dead. The player can hide in the pile of bodies. The reason I chose a pile of bodies was to imply the consequences of being seen by the spotlight, as well as encouraging surprise and sadness from the player. By forcing the player to literally hide in dead bodies I hope that they will feel disgusted, or preferably saddened. 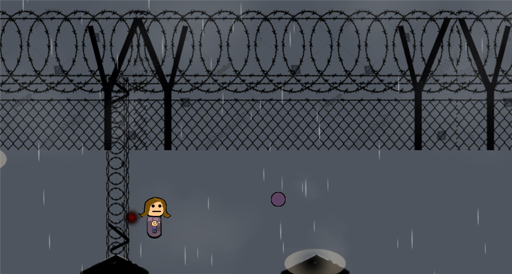 The next screen introduces players to impassable hazards. The barbed wire wall across the path makes the player character bleed, and slows their movement speed. The idea is to make the game more tense and challenging, so the player has to work harder to achieve their goal: to escape. Using blood I am hoping will create a negative emotional reaction, and hopefully a shared experience of pain. By this point in the game the child has grown enough to be visible, to increase the emotional stakes. Not only is the player helping the female character to escape, but she is pregnant. By failing the player has inadvertently murdered a child, which will hopefully create sadness and regret by using the innate desire to protect and care for children.

The player character will then give birth, and the child will walk behind the mother to indicate she is protecting the child. The food collected help the child grow, even once born. At this point the challenge should be increasing, with more guard towers and faster search lights to create a feeling of urgency, as well as upping the stakes to avoid failure. This would be a practise section of a learn practise master gameplay loop. 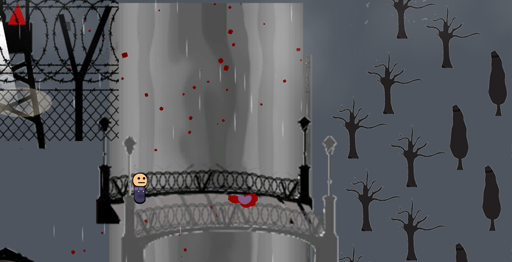 The final section of the game has the most towers, and is the most difficult. However players can see the bridge from quite a distance meaning that they know they are close to the end. They are close to their escape. However once they reach the bridge a spotlight catches them and shoots the mother dead, forcing the child to escape to the forest alone. This is the moment all of the game has been leading up to, increasing challenge and showing the change of the character over time and adversity. The shock and surprise of killing the mother should give way to sadness because of the unjust nature the player character has been shot dead right at the point of getting what she wants (to escape).

Of the ten people I asked to playtest four of them expressed sadness at the end of the game when the mother character dies.

However of the ten people I asked the six people that didn’t feel sadness were also game designers, and expressed frustrations with the liner path the player takes through the game as well as the “cheap” way the emotional cues were implemented. And they are quite right, I have used the most basic techniques available to me to create a player – player character bond and then used the most obvious and basic emotional cues to elicit sadness. But because non-designers felt exactly the way I wanted whilst playing the game I am going to iterate a small amount before playtesting with only individuals that are not game designers, and perhaps only one designer for an informed opinion from someone who knows how the game is achieving the emotional topography that it is.

The individuals reporting sadness understood the narrative, that the circles represented a pregnant woman and her unborn child. They knew they were escaping from prison, and experienced sadness when they failed. They understood that the female character gave birth and were surprised when it happened, and one player remarked that it was a more tense experience once the child had been born because they had to “look after a baby now, too”. They were relieved when the characters made it to the bridge, and the abrupt spot light and gunshot that kills the mother was an unpleasant surprise that then evolved into sadness once the player realised the mother was dead.

I think the experience can be improved, I think it’s possible to improve the intensity of the sadness by increasing the length of the introduction sequence. If I add a father character and have him be the catalyst for escaping a prison, then have him be shot dead and the mother character hide beneath his body. This will be emotionally impactful because of the unjust nature of the death, and the fact a father is dying to protect his partner and unborn child. It will also teach the player how to hide, which is something that was missing from the previous version of the game. I am also considering implementing some kind of still images between scenes ino the game. This will add exposition and allow the character to show how they are feeling and what they are thinking, as well as provide snap shots of the characters lives before and during the game. The only possible draw back will be my own limited art abilities and the time left to complete the art work. Hopefully this will provide the player more time to identify with and develop concern for the character before they are into the action of the game.